Providence House in Crescent Heights is the second new construction project to open through the Resolve Campaign. The building is owned by the Calgary Homeless Foundation, and 24 hour on-site tenant support will be provided through the YWCA of Calgary.

“The project has been educational and a source of inspiration for our team,” says Rob Kennedy, president of Morrison Homes Multi-Family Division.

Resolve has set out to raise $120 million to create affordable housing for 3,000 homeless and vulnerable Calgarians. It involves nine social service agencies and has received funding through government, the business community and individual donors.

Eleven builders have made a $15.4 million pledge and will be the construction managers on a series of apartment buildings for the Calgary Homeless Foundation through the Resolve Campaign. Along with Morrison, the builder group includes Nuovo by Shane Homes, Albi Luxury by Brookfield Residential, Brookfield Residential, Calbridge Homes, Cardel Lifestyles, Cedarglen Living, Homes by Avi, Hopewell Residential, Jayman Built Group of Companies, and Streetside Developments: A Qualico Company. 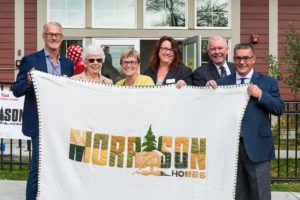 Providence House, which was funded by provincial grants, has 24 apartments that will provide permanent supportive rental housing for vulnerable and homeless women in Calgary. The building also has common rooms and shared dining and meeting rooms.

YWCA, with funding from the Calgary Homeless Foundation, has provided the apartments with a bed and bedding, nightstand, dresser, toiletries, three piece dinette, armchair and basic kitchen items. Residents are expected to start taking possession in early October.

A year ago, Morrison staff members were asked to submit names for the company’s Resolve building. “It didn’t take us long to settle on Providence House — a name that reflects the protective care the facility will provide to its residents, physically, emotionally, spiritually and socially,” Kennedy says. “The word providence reflects optimism, empowerment, and self-reliance, that can be achieved through the promise of a brighter future.

“That’s karma, because it’s so fitting that name would reach 24 women that will call Providence House their home.”

The builder also brought a barbecue as a housewarming gift for residents of the new building.

“With the opening of this new building, our amazing team of case managers and program leads will be able to work closely with women, each living in their own beautiful apartment, to offer support with goal setting, life skills and emotional, physical and mental well-being,” Morley says. 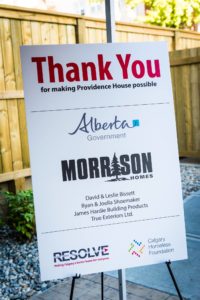